How Stormseal commercialised its unique patented technology with confidence in Australia and abroad. 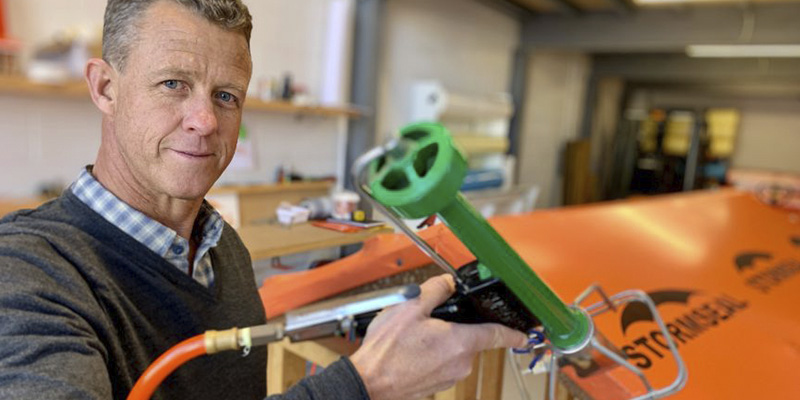 When Stormseal® inventor Matthew Lennox conceptualised his product, his dream was to provide relief for businesses and communities in storm affected areas. His dream has become a reality with the help of government funding and IP protection.

Stormseal® can secure damaged roofs quickly and provide up to one year of protection, providing huge relief for storm victims, their rescuers and insurers. Unlike traditional tarpaulins, Stormseal® uses a unique polymer technology that heat-shrinks over damaged roofs. It doesn’t need constant refitting and can effectively keep out wind and rain. This allows more efficient use of SES volunteer resources, helps keep people safe and dry in their homes and reduces repair costs.

Matthew came up with the idea for Stormseal® after assisting with severe storm damage repairs in 2007. He noticed the number of insurance claims were increasing due to failing tarpaulins.

The first thing Matthew did was to ensure that no one else had come up with a similar invention anywhere in the world. "I considered IP protection from the get-go," he said. "I conducted some preliminary patent searches and didn’t find anything like it so I established the company."

As he expanded to new markets, he also expanded his patent protection. First he sought a New Zealand patent, followed by patents in the UK, US, India and China.

His company can now manufacture and trade internationally with the security of patent protection.

Knowing that Stormseal® would work anywhere in the world and having the rights to manufacture in multiple countries, Matthew's next step was funding to help him take it global.

In 2016 Stormseal® was a recipient of a $450,000 Accelerating Commercialisation grant. While Matthew admits the process of applying was intense, it provided many commercialisation opportunities.

"It was months of work but resulted in a very valuable business strategy with clear commercialisation milestones. We refer to it as the Bible."

The funding assisted Stormseal® to achieve part of their milestones, including:

Receiving government support also opened up the doors to the domestic and international markets. "I call it credibility by association," Matthew says. He adds, "It assisted with the little things that make a business operate: the ability to employ staff, procure materials and equipment and establish effective communications."

Through the support of significant federal funding, Stormseal® was able to roll out nationally and reduce the disruption and damage caused by storms and disasters.